What’s New in this Version

We’ve added new bean status: „Waiting For”. You can use it to indicate situation, in which you can’t proceed with the work on the bean until some event will happen, e.g. arranged meeting, certain date, delegated task is completed, you receive reply for an email, etc. If you need to be reminded to check if such event has already happend you can set up a reminder in Apple’s Remainders or Cal app. Beanflows doesn’t have integrated support for it at this time. 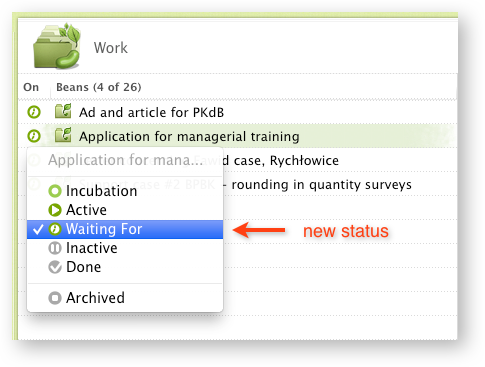 „In Work” button that groups active statuses, incorporates new „Waiting For” status. So there are three „active” statuses now: „Incubation”, „Active” and „Waiting For”.

This button was expanded so it could single out beans with any one of them. To see this feature click on small triangle on the right side of the button. Selected scope is indicated by check mark and by the label. 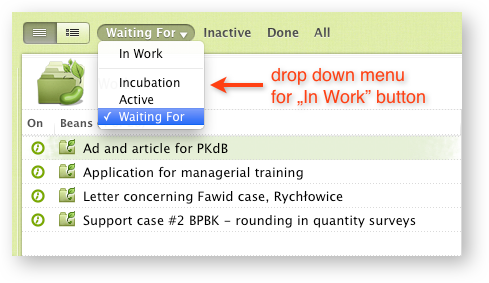 Tables with beans show two counts now: count of beans in selected scope and count of all beans in current flow. This gives you indication that there are beans in a flow in spite of Scope Bar setting that can hide them.

We’ve added sprout overlays on file bean icons, so you make no mistake, this file is a bean 😉

Since the beginning of the Macintosh almost everything was clickable or draggable, so we’ve put some more work into this aspect of Beanflows too.

And it can be quite useful in several ways…

For example this feature will help you create new documents directly in a bean directory (or in a flow directory, as a bean). When you want to save a file for a first time press Command+S, grab a bean icon, drag it and drop on File Save sheet. 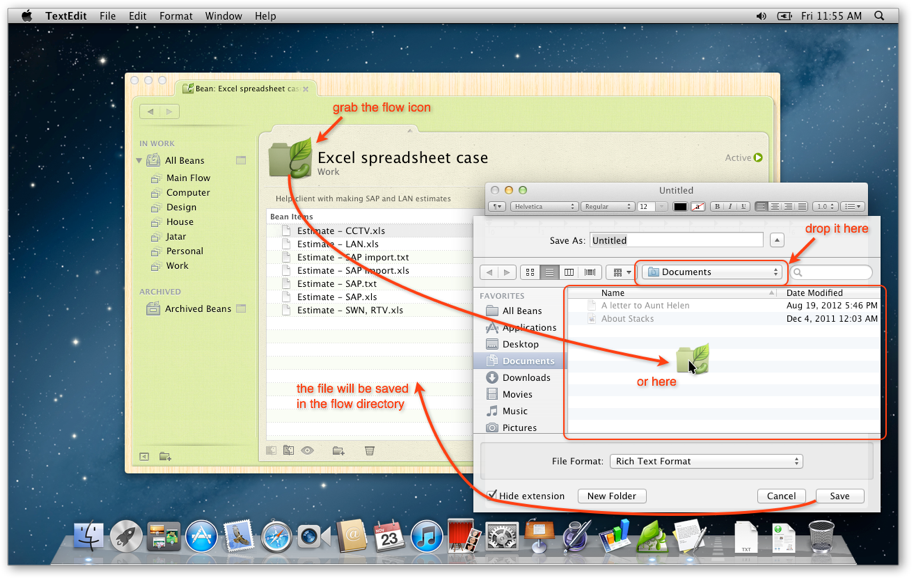 You can also drag a bean and drop it on the Desktop. File or directory represented by a bean will be moved here (or copied if Option key has been pressed in the moment of dropping).

You can drop things on big bean and flow icons

Dropping behavior on a flow was revised

Items converted into a bean will get Incubation status. Non-archived beans will retain their status.

A row receiving drop is marked by green frame now. Also small glitch was fixed, so it is now possible to drop item on row icon.